The Hitchhiker's Guide to St.Petersburg a.k.a. SPb

This is my own micro-guide for foreign tourists coming to see Saint Petersburg.
Please feel free to ask any questions in comments; I will try to expand the guide as much as possible.
Thank you for feedback which would be highly appreciated. 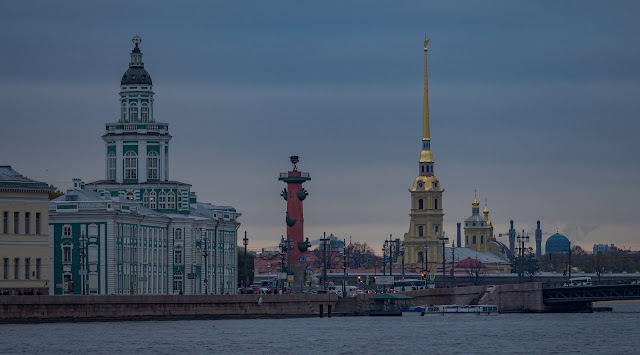 In comparison with most touristic cities of Europe, St. Petersburg may offer one of the widest price ranges for tourist’s accommodation: starting with the basic level mini-hotels and apartments (15-20€ per day for quite a decent single or double-bed room) up to the top luxury ones like Angleterre or Grand Hotel Europe costing 300-500€ per day or more. Unlike in many other cities, there is no regular dependence of hotel prices on distance from center of the city here. Naturally, in such case it is much better to choose from hundreds of options close to the center or at least to subway stations, saving time and transportation expenses. Booking.com, AirBNB and plenty of others are to the rescue.

Probably subway is one of the cheapest and definitely the most comprehensible public transport in any city where it is available. In Petersburg, it is open daily from 5:45 a.m. till 0:30 a.m. Price of one coin token is 45₽ (approx. 0.70€) but you can go cheaper if you use universal RFID city transport card “Podorozhnik”: the cost of card itself is 60₽, the card may be recharged with money in any subway entrance hall, and each trip would cost 36₽ or even less. One trip means one person’s entrance to the subway system, there are no distance zones, limits of line transfers or time limits until you leave subway and go out to city. Map of SPb subway is available here.
Saint Petersburg guest card is also an option with the same tariffs as Podorozhnik, but its functionality is more useful for museums and tours.

Uber is available here as well, making use of taxi safe and affordable. Plenty of local cheap taxi services are available too, but - regretfully - only in Russian.


You can also rent either a car or a bicycle in St.Petersburg. Unfortunately, the city still misses sufficient bikeways, so you will have to move along pedestrian pathways (traffic by driveway is too heavy and too dangerous for an unpracticed foreigner).

It is very sad that definitely the best Yellow-Pages-type electronic guide for many Russian cities – 2gis.ru (SPb branch here) – is available in Russian language only. What I can advise is Citymapper (luckily, available for St.Petersburg, too).

With Citymapper you may easily use overland transport such as tram, trolleybus or bus. After entering vehicle, apply your Podorozhnik card to validation device: 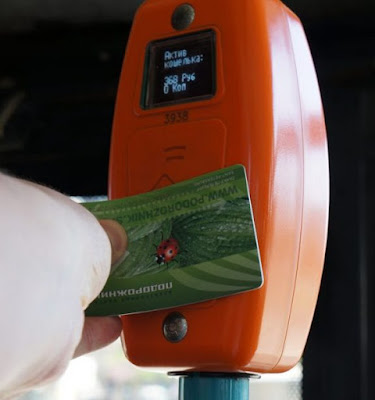 When green arrow appears on the screen, it means that your trip is paid. Ticket controller may come and ask for your ticket; just show your Podorozhnik to him/her, he/she will check it with a handheld RFID reading device to make sure that trip is paid. Checking will not charge any funds off your card: 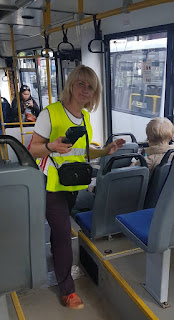 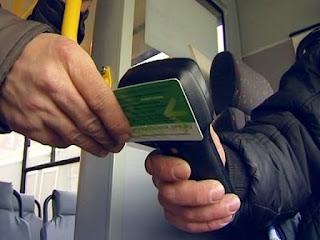 Alternatively, you may pay cash directly to ticket controller. In such case please make sure you are given a paper ticket.
Cost of one trip with overland transport within the city is usually about 32-40₽. Unlike in subway, it does not depend on the way of payment (cash or smart-card).

Five-million megalopolis may offer any cuisine of the world and satisfy the most pernickety gourmet. In case you lack time or money, forget international fast-foods like McDonalds, KFC or Burger King, you can try them at home; I would recommend a national Russian fast-food network “Teremok”: blini (Russian pan-cakes) are served with plenty of various fillers, you may wash them down with mors (cranberry drink) or kvass (rye bread fermented beverage, resembles beer a little, but non-alcoholic one). In case you prefer a canteen, there are some networks, I would recommend “Tarelka” (cost of dinner for one person between 250-400₽, that is 3.80-6.00€). In summer, when it is hot, you will definitely appreciate our national cold soup named okroshka. We Russians love it!

Beer lover may find dozens of small craft brew restaurants all over the center of our city. In case you prefer some couleur locale, I would recommend old-fashioned Soviet-style "Tolstiy Fraer" (to my regret, there is no English or any other languages on their web-site except Russian; you may use automatic Google translate or practice your own language abilities) 😊

NB! Drinking alcohol right on the street is illegal - regardless if bottle is hidden in opaque package or not; in fact, there is a very little chance to get troubled by police just for a bottle of beer on hot summer day - but I would prefer avoiding any risk.

Smoking and vaping is also forbidden in plenty of public places: indoor bars and restaurants, all public transport and its stops, all state, educational and medical facilities, dwelling houses' elevators and stairways, railway stations and airports, hotels (unless in special "smoker's rooms" if available) etc.

No idea. Honestly. Sorry, I can not give any advice here at all since I prefer other kinds of entertainment 😊

Petersburg is rather safe, there are no specific “dangerous” areas to be obviously avoided. In case you follow universal and common sense safety measures (avoid contacting drunk people, apparent scum and bums; avoid desolate industrial areas and suburbs late in the evening etc), that would be quite sufficient.
Though westerly St.Petersburg and other large cities became open-minded and tolerant last years, I would recommend to remember that Russia is an orthodox country with strong traditional beliefs; LGBT are strongly advised not to show their feelings to each other in public, to avoid locals' misunderstanding.

Plenty of paid WCs are available in the center, usually looking as below (indication: Ж means Female, M = Male, easy to remember). Average cost is 20-40₽ (0.30-0.60€). Most city malls and hypermarkets have free WCs inside too, usually not far from entrance (security guards would assist to find one). 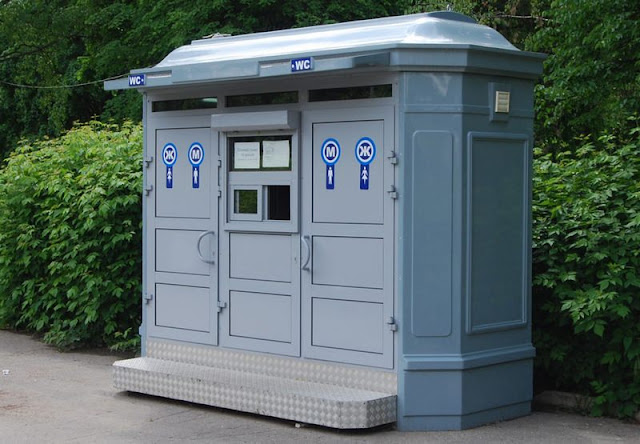 Due to constantly decreasing popularity of landline phone networks, I would not recommend to rely upon public phones (local name - “taxophones”) anymore. It would be more convenient to use local SIM card for cheap domestic calls and internet.

Even pre-paid cell service in Russia is not anonymous, it means that buying a SIM means conclusion of a contract with cell operator. As an option, a tourist may buy a SIM from “unofficial” seller - beside almost any subway station or street market. In fact, it is illegal, but the only problem that may arise is possible termination of the SIM after a few weeks months. On the other hand, it is not a big problem if you are not intending to use the SIM more than a week or two.

Most of tariffs include pre-paid service package - several gigabytes of internet, 50-100-200 minutes of local calls, a few dozens of sms etc - for average monthly fee of around 4-10€. International calls are not cheap as a rule, I recommend to use internet messengers, social networks or VOIP instead. There are four major cell operators of Russia (Beeline, Megafon, Tele2 and MTS - all websites available in Russian only, except the last one). All of them offer rather good and stable 4G coverage within St.Petersburg, tariffs do not differ drastically, so the choice is a matter of personal preference.
I use Megafon (probably not the cheapest, but it seems to have the best coverage in the subway).


9. Money and exchange.
I strongly recommend to use only official currency exchange offices and banks, to remain on the safe side. Before exchange, please make sure that exchange commission (if applicable at all) is not excessive. The best exchange rate (and 0% commission, and the lowest margin) for $/€/₽ I found so far, is at exchange office near Nevskiy Grand Hotel (10, Bolshaya Konushennaya Str). For those who exchange more than 1000€ at a time and need special discounts and security measures, Bank Avangard (2, Ligovskiy lane) is the one. Please let me know if you find anything better, I will appreciate. Seriously.

In fact, St.Petersburg is a modern and developed city and you would not require much cash: Visa and MasterCard are acceptable almost everywhere, except street markets, some small old shops, Russian Post offices and public WCs. In case your card supports PayWave / PayPass, you may even use it to enter subway (though, I would not recommend to do it constantly, since entrance fee will be 45₽ instead of 36₽ when Podorozhnik smart card is used).